We're extremely proud and excited to finally start revealing our plans for the multiplayer modes in Uncharted 3: Drake's Deception. There's a massive post that just went up on the PlayStation.Blog that just gives you an idea of how much information there is to share, and really, we've just scratched the surface. We wanted to have the opportunity to give you the definitive guide to all of the information we've shared with the media since our Multiplayer press event last week.

Before we get started, make sure to check out our Uncharted 3 Multiplayer Trailer below or directly on our YouTube page. It is your crash course into all of our reveals -- and there's even more if you watch closely.

There's so many features and ideas for multiplayer we packed into this trailer, that repeat viewings will shed light on things you may have missed the first few times around. The music selection for this is a custom Naughty Dog remix of "Kill Everybody" by Skrillex. Cinematic Production Lead Taylor Kurosaki lead up editing the trailer, but also came up with not only the music track to use, but did the remix all by himself! Head over to our Flickr page for some gameplay screenshots to get a close up on the action.

Our guiding philosophy during the continuing development of Uncharted 3 multiplayer was to take everything we've done and learned from the multiplayer modes in Uncharted 2 and evolve them in a massive leap forward. We felt that the Uncharted games have a pretty unique core gameplay mechanic, integrated with some pretty awesome underlying technology and visual effects, that make our single-player campaigns feel so satisfying to play. It's all about taking the verticality of our games, the ability to traverse across all these beautiful, interactive enviornments, while experiencing solid action-adventure shooter mechanics and intense set-piece modments, and translating them to a multiplayer environment.

There are three gametypes we covered off on recently -- a small subset of the full list of gametypes we'll be revealing over time. Team Deathmatch - you should know this one by now. Two teams of up to 5 players each trying to get to the allotted winning number of kills before time runs out. Three Team Deathmatch - A small team variation of Team Deathmatch with 6 total players across three teams -- 2 vs. 2 vs. 2. Free-for-All - One of the most requested gametypes. It wasn't possible to implement this into Uncharted 2 after we shipped, so we put it into Uncharted 3 instead.

All our maps have always been based on environments taken from the single-player campaign and Uncharted 3 is no exception. Although the trailer shows more than two maps/environments, we've only detailed and presented two so far. These are pretty well documented in the screenshots of actual multiplayer gameplay we've uploaded to our Flickr stream (feel free to download them). The Airstrip - Looking over the screenshots it looks like there's three maps represented, but in reality there's only two maps. The Airstrip is a two-part map where the location and map layout actually changes in the middle of the match! The first part of the match takes place on a massive cargo plane being chased by trucks, with players jumping from truck to truck and between the cargo plane and the truck convoy. The second part of the match begins when the cargo plane is about to take off from the runway. After takeoff, the match changes locations for all players to the airstrip hangar area for a slightly more traditional multiplayer setting and layout. Just watch out for the fighter planes that will inevitably come in for a strafing run. The Chateau - You've seen the interior of the Chateau in our first gameplay video release. This map lets you explore the interior and surrounding grounds of the Chateau in a more traditional arena style setup. Apart from plenty of verticality (and ziplines), the Chateau is another dynamic map as parts of the building will be burning during the match.

New to Uncharted 3 multiplayer is character customization. Both heroes and villains skins will have a hundreds of customizable parts, from accessories to shirts and pants to a deep weapon customization feature. Even named characters, like Drake or Sully, will get plenty of options to make your character your own. Hand in hand with customization is our emblem editor. If you’ve worked with emblem editors in other games, you’ll be pretty familiar with the one we’ve implemented in Uncharted 3. Our emblem editor extends the level of customization of your online profile with hundreds of decals, three layers, rotate and scale functions – you’ll see your final emblem on your character and even possibly in the environment during matches. Speaking of weapon customizations - it goes beyond the cosmetic. We have weapon mods that not only change the look of your weapon of choice, but they are functional too, adding precise scopes, bigger clips and more! Boosters are back in Uncharted 3, but we didn't just carry over the Booster selection from Uncharted 2. There are a few old favorites in there, but we've created what we feel is a more satisfying mix of old and new based on your feedback and selection patterns. We've extended the Booster system with a special subset of Paid Boosters, give you a one-time Booster that you spend some cash to have the option of using during a match. There's still other ways to get minor advantages during a match. You have to option to select a specific Medal Kickback, which activate when you've racked up the required number of Medals for that specific Kickback. You can see this in the Multiplayer Trailer when the RPG Kickback is activated at 00:50 into the video. You're taking a little chance when you select these, as some really choice Kickbacks require you to get a significant number of Medals before you can activate them.

Those are a TON of customization options you can pick through and we know that you don't want to be bogged down in menus in the limited time before the match begins trying to figure out which sets of customizations you want to slot for that match. We've introduced four slots to save specific loadouts -- your starting rifle, starting sidearm, weapon customizations and mods, Boosters, and Kickbacks.

All of these customization and modifier options allowed us to extend our in-game reward system. No longer is everything tied to level gain or cash. During matches, you'll have the opportunity to get items from treasure chests on the maps. You'll also be able unlock a wide variety of items and modifiers through Missions. There are two types of Missions - some are instant missions and others, accessible from the Multiplayer menu, are more long term. Instant missions can appear in the middle of a match and provide a target that you can complete within a few matches tops. The Missions you select from the Multiplayer menu will take significantly more time, days of playtime possibly, and the rewards will be accordingly more significant.

A couple of things we've learned over the past year and a half of reviewing thousands upon thousands of Uncharted 2 matches is that it really sucks to be blown out on the way to losing a match and that winning or losing a tightly contested match by some kill made way off-screen is a bit of a letdown. We've thought of some ways to make these inevitable multiplayer moments a bit more exciting and satisfying. Power Plays activate when one team is way behind in the score count. They provide the team on top with an opportunity to maximize their cash for the match, while evening the odds a little for the team on the losing end of the equation and giving them the opportunity to close the gap a little.

If matches are too close to call as they get close to the end, Overtime will activate, giving either time an opportunity to win the match by more than one point within a limited time. If the game is still too close to call, the match enters Sudden Death. Sudden Death is similar to Elimination - there are no respawns and the last player standing wins the match for their team.

As you're looking to get into matches, we've made some updates to make it easier to get into games quicker, and with your friends. The first is Late Join, which is a staple of many online games and for good reason. It ensures that matches stay full, that you can get into matches faster and you can get into your friends matches faster if there's a slot for you, instead of waiting for your friend to finish their current round. We've heard that many of you want to play with a friend on the same couch and we're really proud to say that we were able to not only implement same-console split screen but you can log into two independent PSN IDs for most gametypes - the ones you can't are to prevent unfair collusion between players.

Playing with friends and creating a team environment is extremely important for us and we're trying to encourage this with the Buddy system. Each player will be partnered with a Buddy and you'll be able to collectively share your successes throughout the match with each other. You can even pick up Treasures -- more on that later -- for your Buddy. The Buddy system also allows you to choose to spawn on your Buddy if they are safely out of combat so you can jump into the action together quicker. This is key since most of our game modes are all about team play and teams that stick together will do far better than teams who don't.

We've also made it easier to share your passion for Uncharted 3 multiplayer with your real life friends and family through social media hooks we've added to the game. We've integrated Facebook into the game in a way unseen on a console game so far - way more than just sharing videos and photos, or updates to your Wall. USA Today has an exclusive look at our plans to bring social networks into Uncharted 3. Cinema mode has gotten a revamp allowing you to create clips from full matches and upload them directly to your own YouTube OR Facebook account (or both). We're streaming a tightly curated list of awesome Uncharted videos created by you - our community - back into your multiplayer menu via Uncharted TV. We'll have more details on all of the above over the next few days.

If you're a fan of our cooperative multiplayer modes, I think you'll be intrigued with how we've taken this approach to evolve multiplayer into the co-op gametypes. However, we haven't revealed anything for co-op yet. Everything and anything co-op will be revealed further down the line.

In just a couple of months - the Multiplayer Beta for Uncharted 3 begins WORLDWIDE on June 28, 2011, with early access for PlayStation Plus members or by purchasing specially marked copies of Infamous 2.

There should be a ton of news stories out there from the US and Europe from our Multiplayer Player event last week, I'll be keeping this post updated during the day with as many links as I can. 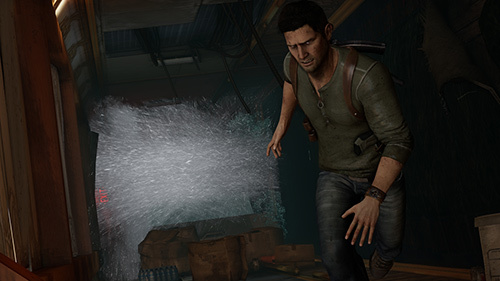