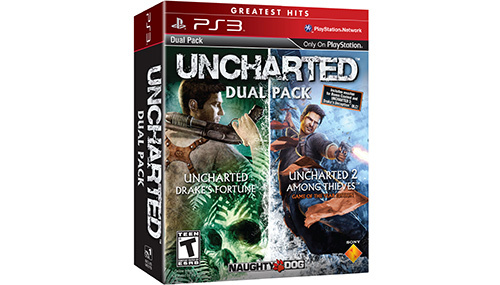 We've also put together a great retrospective trailer to commemorate the announcement of the Dual Pack - check it out below!

Here at Naughty Dog, we’re excited to bring these two critically acclaimed games together for the very first time. As we focus on finishing up Uncharted 3 as we speak, we look back and are humbled by the accolades we received for Uncharted: Drake’s Fortune, our first game in the series, and we never could have imagined that our second entry, Uncharted 2: Among Thieves, would go on to become the 2nd highest-rated video game of all time, receiving over 200 Game of the Year awards and over 41 perfect review scores. We want to thank all of you again for your continued support!

So for all you who are new to the PlayStation community, or for those of you who just haven’t yet had the opportunity to join Drake, Sully, Elena, and Chloe – this is your chance! Grab your Uncharated Dual Pack NOW at your favorite retailer in-person or online – get tons of loot with the included “Super Voucher” – and prepare to uncover the truth in Uncharted 3: Drake’s Deception on 11-1-11.

One of our very own, game designer Neil Druckmann, heads to snowy Park City, Utah, to speak on a Sundance 2011 panel discussing narrative a…