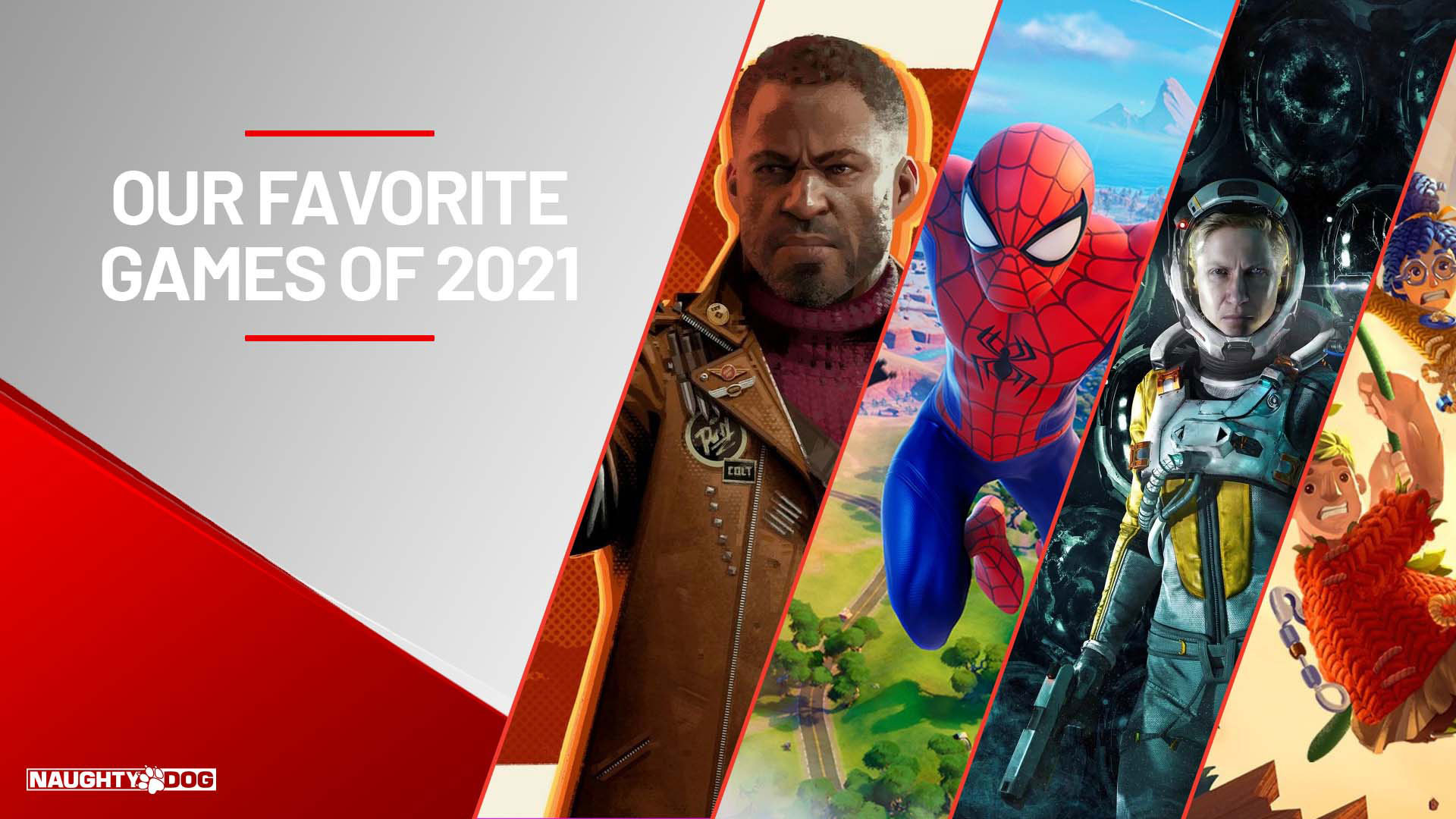 2021 was quite a year for games -- both as a developer and as a player. Whether we leapt through jaw-dropping, wild worlds in Ratchet & Clank: Rift Apart or leapt through time in Deathloop, we feel privileged to not only make games but experience the incredible work of our peers -- and, of course, have a blast!

We enjoyed talking about our Favorite Games of 2020 so much that we decided to go another round this year. Check out some of the games that inspired, thrilled, and entertained a few of us here at Naughty Dog in 2021:

This was a unique and great game that my 7-year old daughter and I bonded over. We worked together and took turns. The different bugs and all of their special strengths and weaknesses made for a compelling adventure/puzzle game. #WouldBuyAgain

Setting an immersive sim in a time loop was a brilliant idea. Every space you visit and revisit becomes richer as you gain new tools, new information, and new appreciation of the environmental storytelling. The art direction is also stunning, layering 60’s Bond villain mansions atop abandoned bunkers from Lost, all on a gorgeously rugged and desolate island.

Most importantly, Deathloop helped me break my bad immersive sim habits. The time loop structure gave me permission to let go of playing flawless zero-kill zero-alert runs, and adopt a more improvisational and chaotic playstyle. This was particularly true when invaded by a skilled Julianna player, instantly recontextualizing the map I had been stealthing through into a thrilling cat & mouse arena.

The freshness of the universe is what really grabbed me, at a time when so many games feel like more of the same. The level of polish is rock-solid too, from the art direction, to the audio design, to the gunplay, the protagonists and the world, everything is telling the same story.

I've always admired Arkane's level and mechanics design in Dishonored, and with Deathloop, l feel like they fully embraced their immersive sim nature and built an entirely unique structure of a game out of it. It's such a simple premise, but it's so complex in how you unravel it all as a player. Brilliant work.

When I first started working on this multiplayer project, I had a very superficial opinion of Fortnite as something that was a mere toy for tweens, a passing fad that was only popular because of Drake. How wrong I was! Fortnite is truly inspiring, not just as a multiplayer game but as a game period. Epic takes incredible creative risks every season, coming up with new ways to totally transform the game, and they seem anything but short of new ideas. I've been especially impressed with the interactive "concert" events they created: a multiplayer, interactive, limited time musical event? Doesn't get much more innovative than that! Now if I could only learn to build...

I love City Builders, and I love Steampunk City Builders even more. Taking a Steampunk City Builder and jamming Victorian era humanity’s "last stand" into the arctic... giddy up! Spending a day laying out street infrastructure to keep a coal fired generator running while your dirigible equipped hunters try to find enough food to keep your peeps from starving isn't everyone's jam, but if it is, this thing is going to blow your mind. Frostpunk was beautifully gameplay balanced with just the right learning curve to teach you every time you failed (again and again and again). The payoff the first time you win? You'll text your friends. I enjoyed the cello-heavy score for hours on end, and the atmosphere the game created was so chilly I usually grabbed a blanket, even here in sunny Santa Monica.

Supermassive's unique anthology continues to impress with the latest in their series of short, original horror stories. House of Ashes doesn't shy away from acknowledging its inspirations, but still feels exciting in its approach. I'm always protective of the cast in each of these installments and losing any one of them feels devastating! Knowing the decisions I make will always have a rippling effect makes me think long and hard about my choices – well, as long as the timer lets me, anyway. Thanks for carrying the torch for horror in games, Supermassive!

I actually can't say too much about this game because it's one of those games that's best enjoyed the less you know about it. I will say though I haven't been as blown away by the creativity of a game in a very long time, and despite having a toddler I found myself up till 3AM every night playing till I finished it. Can't recommend it enough.

There's really no greater joy than watching a fuzzy bumble bee bust out of a hive with two victorious dolls attached to its hindquarters after you've left a wasp nest smoldering in fire.

Truly, I'm sure that this game absolutely wrecked some relationships (romantic and otherwise), but this was a huge hit in my household. My partner has never been a gamer, and she really got into this. We've spent hours on the couch laughing, plotting, and occasionally forcefully giving directions at each other (HONEY I NEED YOU STEERING THIS DAMN UNDERWEAR!). What a gift Hazelight Studios delivered -- absolutely superb.

I'm a sucker for platform games, and It Takes Two combines that gameplay with amazing puzzles, a great story, and beautiful art. There is so much variety, and clever mechanics are continually introduced. And the bold choice of requiring a second player made the experience unique. I had a ton of fun playing it with my son.

Metroid Dread leaves you in awe thanks to its satisfying gameplay and moody atmosphere while telling an engaging story.

Studio "Mercury Steam" did a fantastic job with "Metroid: Samus Returns" on 3ds back in 2017, now "Metroid Dread" and I'm craving for more.

A wonderful concoction of beauty and horror, Returnal created a world I lost myself in for MANY hours during 2021. Returnal was a masterclass in design efficiency and created a really compelling game loop that made my heart pound and palms sweat. The art and audio were both spectacular and satisfying. I loved the subtle environmental storytelling and how the backstory slowly revealed itself in unconventional ways.

There's no doubt that Returnal is a product of its time both mechanically and thematically and one that checks off so many boxes for me. I've enjoyed many roguelites and timeloop inspired games for so many years now, from Don't Starve to Bloodborne to Deathloop. Add to that the existential themes Returnal explores and you end up with elements that are being explored in so much of our entertainment these past few years. Rightly so, given that the world around us lately can have us simultaneously feeling stuck in time while questioning our existence and future. Okay, enough of the heavy stuff! Returnal is also wholly engrossing, features expertly tuned gameplay, and is stunning to look at. Unraveling the narrative piece by unexpected piece as you struggle to get further and further along had me hooked for hours, when I wasn't trying to master the thrilling boss fights. When I first saw a glimpse of Returnal many years ago, I was not at all prepared for how much of my mental space it would occupy at release. It is still on my mind to this day! Hats off to the entire team at Housemarque. I cannot wait for what's next!

We want to thank all the developers who created such incredible experiences. Thank you to the fans and players who supported us through the year. We hope you have a happy and safe holiday season, and we look forward to seeing you in 2022!

Naughty Dog President Evan Wells shares some exciting updates about the studio and The Last of Us Part II.